The benefit of hindsight: how market systems theory could have predicted Aflasafe uptake in Nigeria

Incentivising Nigerian smallholder farmers to use a bio control to protect their maize.

Can we use market systems theory to predict the impact of a Pay-for-Results (PfR) prize competition? Looking at AgResults’ experience of incentivising AflasafeTM uptake in Nigeria, the answer may be yes.

The project has been largely successful in incentivising uptake. In its fourth full growing season, over 25,000 farmers applied AflasafeTM to over 73,000 metric tons (MT) of maize.

Yet how these results have built on previous seasons does not fit the project’s original expectations of scale. Upon further reflection, it’s clear that applying a market systems framework could have given us a more realistic theory of change for what has happened in Nigeria.

The initial project design developed for this project anticipated that the PfR prize mechanism, which offered a per ton incentive to all participants that aggregated AflasafeTM-treated maize, would lead to systems change through an increased farmer awareness of AflasafeTM. From there, other actors would “crowd in” to see how they too could benefit from the incentive.

The prediction was that once a certain threshold of treated maize was reached using a subsidised intervention such as a PfR prize, the public sector would respond by enforcing aflatoxin standards. This would create a positive feedback loop that would increase awareness and further adoption of the product. When we look back at how those expectations were derived, we find it would have been more accurate to apply a market systems framework to predict results.

Assumptions versus results: what a market systems change framework could have told us 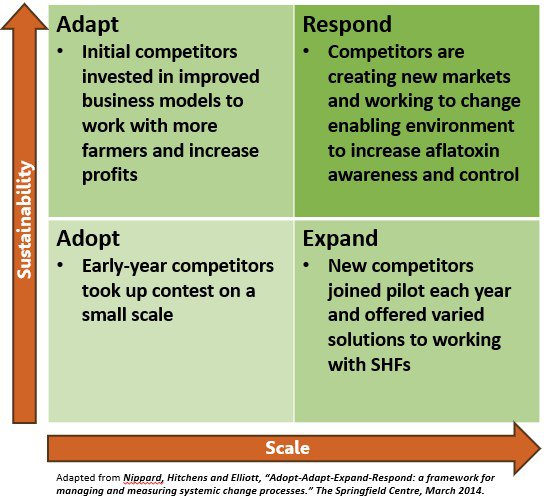 In reviewing the results from all completed project seasons, we realised that initial assumptions for scale had not appeared. Uptake was slower than anticipated since farmers and aggregators wanted to test and convince themselves of the efficacy of Aflasafe. The per-farmer adoption of AflasafeTM has been lower than projected. We decided to analyse the results within a framework more commonly used in conventional economic growth programmes — specifically a market systems change framework (see diagram) — to see if that could have better predicted the actual results.

The results to date have been somewhat encouraging in showing a market leaning towards systemic change. The graphic shows the Adopt-Adapt-Expand-Respond (AAER) framework, which when applied ex-post turns out to be a good predictor of what has happened in Nigeria. Over four years, we have seen participants largely respond in ways that the framework would have predicted had we used it to inform the project design and its outputs. Here are some of those ways:

Conducting this review has helped us understand some of the nuances that also drove differences in scale between design assumptions and actual results. One major difference is in the number of initial farmers and output per farmer. The initial years were largely an exercise in proving the product’s efficacy and its use before competitors and farmers truly believed in it. Therefore, the output was quite low on a per-farmer basis until the third year of the project. This is an important lesson for us in being able to better plan for a prize incentive’s potential uptake and reach.

Another assumption in the initial design - and key to achieving systemic change - is that the private sector response and creation of a premium product in treated maize would lead to a public sector response in the form of increased aflatoxin standard enforcement. Already, some competitors have begun to lobby their regional governor to enforce aflatoxin standards. Perhaps more importantly, the project has proven that AflasafeTM can work on a wide scale and can lead to market premiums for treated maize. This development has fueled new funding for broader commercialization of AflasafeTM in Nigeria.

Our ex-post analysis of the results in Nigeria hints that pay-for-results prize competitions can be designed in part using similar market system tools and frameworks that are normally used in development programming. AgResults is currently designing new prize competitions, and we are actively testing some of these project design tools to see what works. If we obtain results that validate our findings above, we will be able to update the prize competition design process to be more accessible to the development community.