How ELAN RDC is upgrading women’s roles in DRC.

Recent years have marked a heightened focus on integrating Women’s Economic Empowerment (WEE) into market systems programming. Yet all too often, efforts to mainstream WEE have translated into a crude focus on female participation. “Are women present in the sector?” programmes might ask, “Check. Job done”.

While it is of course critical that we ask this question and take steps to ensure that our interventions reach women, participation is only one part of the puzzle. By focusing either predominantly or exclusively on women’s participation within a market system we tend to ignore the terms of their engagement.

Sharpening our focus on the terms of female participation

Women are central to the labour force in DRC, yet highly marginalised within it, meaning that participation does not necessarily mean women derive benefit from their work.

This prompted a great debate among the ÉLAN RDC team: Was it enough for women to participate in an intervention when we know, for example, that women’s influence over additional income earnt is limited?

Or should the programme be looking to achieve more transformative outcomes? Is it better to focus on depth of impact (the terms and nature of participation) over breadth of impact (participation per se)?

In 2015, in dialogue with DFID, the programme committed to targeting depth of impact by incorporating two log-frame indicators focussed on the progression of women’s roles within market systems.

Targeting the right types of change

We identified six role change types, as depicted in the diagram below1. These can be applied to different market systems, sit across both supply and demand-sides, and allow for spill over between economic, household and community spheres.

In a significant departure from many market system development programmes, ÉLAN RDC now defines gendered results as when a woman’s role has been upgraded and understands this to have happened when she experiences any one or more of the role change types depicted below as a result of the intervention, over at least a year.

This reoriented the team away from a superficial focus on participation and income increase, towards more meaningful changes to women’s positions within the market system - this has guided work ever since. 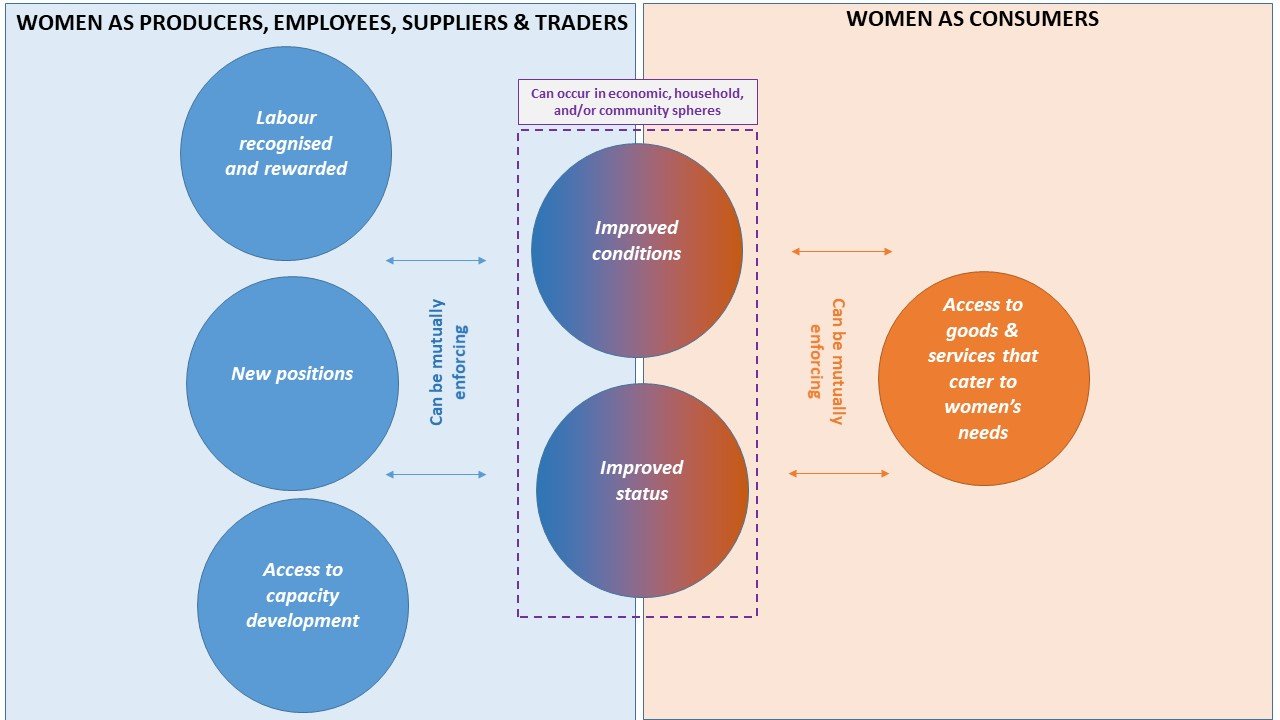 Since reorienting its WEE ambition to target deeper, more transformational outcomes, ÉLAN RDC has contributed to women’s upgrading across a range of interventions:

This supports women’s labour to be recognised and rewarded as women move from invisible production (where they are often the primary labourers, but are not recognised or directly rewarded as the contract is registered under their husband’s name) to visible production (where women are registered as a contract farmers in their own right and receive direct remuneration).

This in turn can contribute to other dimensions of role change. For example sustained and direct access to capacity development and improved conditions through access to the commercial farms’ mechanised services.

Coffee
ÉLAN RDC has supported women to move into new positions. 30 per cent of the leadership roles at Muungano cooperative are now assumed by women. 70 per cent of female members are now involved directly in trading, compared to women’s negligible involvement in leadership or sales transactions previously.

This in turn has contributed to women reporting improvements to their status – another important dimension of role change. Women have also taken on new positions in IFCCA. This is a new representative body for women in coffee and cocoa, whose set up was co-facilitated by ELAN RDC.

This has also lead to improved conditions for women within the household. Time spent on unpaid care (cooking, fetching fuel etc) is more than halved through the use of ICS.

What do you think?

We’ve tried to give a flavour of how Elan RDC has made use of a shift in how it conceptualises and delivers WEE outcomes in the DRC and the impacts that this has had for the women that we work with. We’d love to hear your thoughts below the line.

1. Full definitions of each role change can be found in ÉLAN RDC’s Methodology for Measuring Progression in Women’s Roles

Working with boat operators, traders and provincial authorities for the elimination of informal and illegal taxes along the DRC's Congo River. Report