Practical Action was at the forefront of M4P (Making Markets Work for the Poor) in the early days. We developed Participatory Markets Systems Development (PMSD): a pioneering approach that sought to combine the principles of systems thinking, participation and facilitation in a market context. It is an approach that has been used globally, in a variety of sectors and contexts and by numerous organisations. In 2020, we will be revamping PMSD to bring it up to date with the very different external context now seen, and to take into account new thinking on market systems and organisational learning. 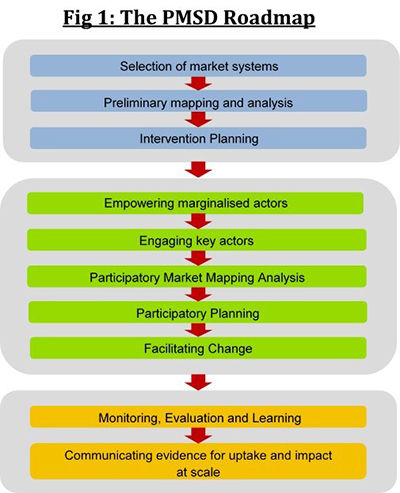 We developed this approach about 15 years ago - at a time when market systems approaches were still relatively new. It was not designed simply to be a tool or a methodology, but as an approach to enable us to understand the markets around us and to help us work with the people, contexts and forces that shape those markets.

It differed from more mainstream M4P approaches in that a central feature was collaboration amongst market actors themselves, to address constraints in the market system; and by the focus given to the empowerment of marginalised groups to participate in and influence that process. These elements were not merely techniques to achieve a change in a particular market function. They were supported in order to change the dynamics between actors and to shift power in market systems. So they were themselves a route to systemic change.

The central tool was a dedicated toolkit (the PMSD Roadmap): a staged, sequential process designed to inspire, guide and train practitioners on how to facilitate the approach. Each step came with guidance, training materials and links to other resources including training materials. The Roadmap is openly available for you to download and use.

How has PMSD been used (in Practical Action and beyond)

The roll out of the Roadmap was accompanied by a concerted effort to build the capacity of a network of practitioners in country teams in Practical Action itself, as a first step. This led to PMSD being widely adopted across our programmes, predominantly in agriculture[1], but also in energy markets and other contexts. Elements of PMSD were used to carry out participatory mapping of climate information services in West Africa as part of a USAID initiative. And it has been used in the water and sanitation sector.

A typical agriculture example is a CIDA-funded initiative in the livestock sector in Mashonaland, Zimbabwe. The approach led to the development of new commercial relationships within the sector and a successful paravet scheme led by a drugs company. Ultimately 20,000 livestock farmers and other market actors benefitted from improved stock quality, better prices and increased sales.

The influence of PMSD was felt beyond Practical Action. It was cited by USAID as a ‘best practice example’[2]. It was adopted by other international agencies, including Christian Aid and Flora and Fauna International who adapted it to a conservation context - an example of the relevance of the approach across sectors. It also influenced the development of Emergency Market Mapping and Analysis (EMMA) and Pre-Crisis Market Mapping and Analysis (PCMMA).

However, in recent years PMSD has not kept pace with developments in the market systems sector, such as new thinking on adaptive management and measuring systemic change, and the increased attention to areas such as women’s economic empowerment and resilience. As a result the approach has dropped off the map a little.

So what now for PMSD? 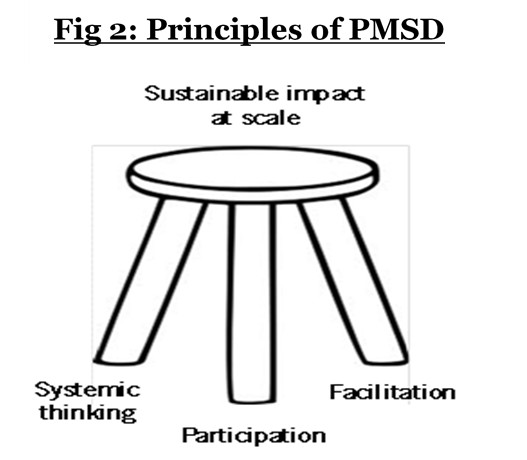 PMSD will be an important approach for the achievement of Practical Action’s ambitions to contribute to global change and the SDGs, particularly those related to low input regenerative agriculture, decentralised renewable energy and the energy / agriculture nexus (e.g. energy supporting productive uses in agriculture).

But PMSD is relevant beyond Practical Action. We believe that many of the features of PMSD, including the role of trust and collaboration between actors and the shifting in power dynamics, are becoming more relevant to the field of market systems development and the understanding of systemic change and measurement.

The approach retains unique features that would add significant value to the work of various organisations engaging in the market systems field. Practical Action is recognising this and is seizing the opportunity to revise, update and upgrade the approach.

In 2020 we are revamping the PMSD approach, notably:

The new Roadmap will be more of a Toolkit. It will move away from a single linear process to a format that helps users navigate a variety of Practical Action and other tools to address the needs of their particular contexts.

It will signpost to other related resources, making it a comprehensive resource and starting-point for practitioners in the market systems field.

We will use a practitioner-led approach to review and upgrade the toolkit - drawing on our programme staff and other practitioners in Africa, Asia and South America. We are very interested to hear from organisations who would be interested in participating in this process.

We are excited about the potential that PMSD still has to offer to the market systems field and look forward both to sharing the revamped approach later in 2020, and to working and engaging with you all to take forward market systems practice.

In the short run we are currently looking for a consultant to help us with this process. If you are interested please have a look at the the job posting (closes 6th May, 2020).