PMSD: from a roadmap to a toolkit

Back in the mists of time, sometime before the covid pandemic hit, we wrote a blog on the BEAM Exchange about plans to revamp Practical Action’s Participatory Markets Systems Development (PMSD) approach.

Now, about 18 months later, after a process involving a lot of consultation across the organisation and outside, and the testing of different tools, the new PMSD Toolkit is launched. It can be found here on the main Practical Action website.

So what have we actually done?

The original PMSD Roadmap has a lot of fantastic content, maybe even too much! As a result, it was very bulky and could be off-putting for some. The new material contains a mixture of old and new resources. In the interest of not reinventing the wheel, it also includes tools and resources from other organisations, where they fit in with the overall PMSD framework.

It retains the unique aspects of PMSD:

But it is much shorter, preferring to point people in the right direction of potential tools and resources rather than laying everything out for them.

We have also moved from a sequenced set of Nine Steps that looked like this: 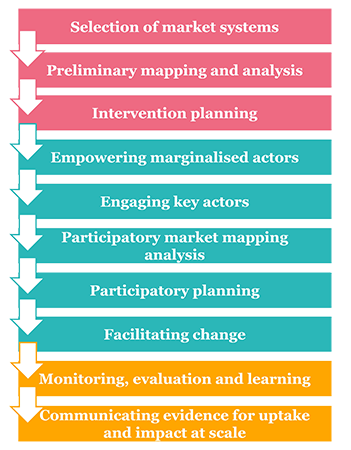 One of the challenges of the original roadmap was that it assumed that practitioners started at Step One and finished at Step Nine. In reality we have found that not everyone is this linear in their approach - many want to use part of the process and adapt it to their particular context.

Adapting the approach to your particular context

The new structure aims to facilitate this adaptability by providing practitioners with different entry points into the tools:

But it’s not just the structure. We have also tried to make the ‘new’ PMSD better at dealing with gender issues in markets and we have taken advantage of existing tools, from other organisations, to improve how it supports the development of private sector partnerships.

Despite these changes, the essence of PMSD remains the same, as enshrined in its original core principles – systems thinking, facilitation, participation and now, gender.

It's a 'live' resource and feedback is welcome

One thing that seems certain is that we need this to be a ‘live’ resource. We will adapt it as we get feedback from our own staff on the utility of the tool and we have a lively internal PMSD Community of Practice that will facilitate feedback and revision.

But we would also like to learn from others using any of the PMSD or similar tools in their work. Please take part by 'commenting' below or by emailing me: john.chettleborough@practicalaction.org.uk