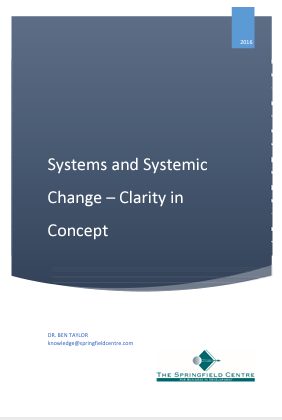 Published by
The Springfield Centre

Exploring the meaning of systemic change in simple terms, so that the concept can be put to practical use.

Systemic change is a concept that has received a great deal of attention in recent years - in development and in other areas of policy, research, academia and practice. Much of this has focused on emphasising the complexity which is inherent to an understanding of systems.

The focus on complexity emerged as a response to the oversimplification of external intervention which treated societal problems as simple input-output models. However, what the literature has gained in richness, it has lost in utility and many have been left asking the question how does this help?

This short concept paper intends to revisit and further develop two existing frameworks used in market systems development and explain them in simple terms so that they might be synthesised to understand better what systemic change is.

What practitioners say about the tool

"It is simple and easy to explain to project teams."

What practitioners say about the tool

"It is simple and easy to explain to project teams."